Posted on December 13, 2017 by The Untranslated 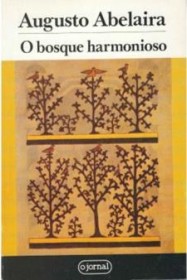 No, this is not some tongue-twisting onomatopoeic coinage from Finnegans Wake. As a matter of fact, in the language of  a certain tribe inhabiting the interior of Java Island, this word is habitually used  as the coordinate conjunction equivalent to the English and. Incidentally, these people make do with only thirty words most of which have multiple meanings. For example, the word trob can convey such disparate notions as “eagle”, “sea”, “milk”, “dog”, “stone”, “mother”, “son” as well as many other ideas.

We learn this curious but hardly trustworthy factoid from The Harmonious Forest, a 16th century manuscript analysed by the narrator of Augusto Abelaira’s novel of the same name – a slim book with plenteous rewards. This Portuguese novel, published in 1982, follows in the footsteps of Jorge Luis Borges, Italo Calvino  and Umberto Eco in its playful treatment of history and textuality, its questioning of the reliability of written documents and its preoccupation with the blurred distinctions between forgery and authenticity, the copy and the original.

The novel itself is presented as a notebook kept by  Arnaldo Cunha, a schoolteacher with scholarly ambitions who is constantly tormented by existential anxieties. The contents of the notebook are a hodgepodge of different texts that provide us with a glimpse of the narrator’s everyday life, his philosophical musings, and the subject of his research. There are four primary documents making up the text of the notebook. First of all, there is the Renaissance novel The Harmonious Forest written in Latin by the obscure 16th century traveller and polymath Cristovão Borralho. We get to know this work indirectly, either through translated excerpts or just through brief summaries provided  by Cuhna. Secondly, there is the biography of Borralho penned in Portuguese by his friend Gaspar Barbosa. Thirdly,  there are  copious annotations left in Barbosa’s biography by an anonymous 18th century political exile in Paris. Likewise, these two texts are made available to us as either quoted passages or the teacher’s retellings. Finally, the notebook contains the personal diary of Arnaldo Cunha in which he discusses the three above-mentioned texts as well as vents his numerous frustrations and insecurities. Since jumps between these four texts are rather abrupt, it requires a certain effort to keep track of the story gradually emerging through the interaction of  direct and indirect quotations, summaries, observations, digressions and interpolations.

Arnaldo Cunha is a self-conscious parody of the typical protagonist in an existentialist novel. Oppressed by the absurdity and wretchedness of everyday life, he wants to achieve something significant, knowing all too well that he is neither talented nor ambitious enough to do that. He has a lot of interests in various fields that he feeds with disparate reading, but none of his enquiries are profound enough to let him make his mark in the world. He is trapped in the limbo between his immediate surrounding, which he considers low-brow and tedious, and the unattainable realm of  stellar performance and recognition. The only way to satisfy his ambitions seems to be writing an important work (think Antoine Roquentin from Nausea). However, he realises that it cannot be a work of fiction due to his lack of imagination, so the only option on the table is a critical study of somebody else’s work. And that somebody should be virtually unknown to the literary and critical establishment, so that it would be “easy to say new things without great effort”.  The mysterious Cristovão Borralho appears to the ideal candidate for such an enterprise.

The name will be familiar to those who have read The Travels of Mendes Pinto, a 16th century travelogue chronicling its author’s adventures in Asia and Africa that warranted  justified comparisons with Marco Polo’s famous Book of the Marvels of the World.  Cristovão Borralho is mentioned in The Travels several times as Fernão Mendes Pinto’s companion.  Borralho’s The Harmonious Forest is a patchy affair. Most of the book  is made up of  the tall tales shared by his comrades aboard an India-bound vessel on the eve of its fight with a Turkish galliot. The stories are either bawdy tales reminiscent of The Decameron or fantastic adventure stories with philosophical undertones bringing to mind some of Voltaire’s Contes and Swift’s satires. If we assume that the real author of these narratives is Borralho himself, then it becomes evident that the traveller and scholar had a precocious mind that greatly outstripped his epoch and envisaged already in the 16th century some of the developments in philosophy and science which would take place only centuries later. One of the funniest stories is ascribed to Tomé Lobo (who is also mentioned by Mendes Pinto). In it we learn of an island inhabited by astute macaques who have invented their own means of communications using a chest with golden pieces as their vocabulary. Each piece stands for a specific word, so in order “to talk” a monkey has to use the relevant tokens and then put them back into the chest. Everything changes, however, with the visit of the Portuguese explorers who introduce on the island the idea of God and thus trigger a language revolution which leads the monkeys to differentiating between the signifier and the signified and thus creating the prerequisites for the democratisation of discourse: the appearance of paper words, serviceable insofar as their value is backed up by the golden pieces, and accessible to all monkeys. Tomé Lobo’s account is not just a sweeping satire of the critical theories fashionable in the 1960-1970s (i.e. structuralism and poststructuralism) – it makes fun of the common human urge to create theoretical systems explaining the world and then regarding  them as the ultimate truth. Some of the macaques bear suggestive names: Planton, Fucô, Lunan.

By and large, when describing their encounters with the indigenous population of some exotic place, the local language is one of the primary objects of the explorers’ interest. Besides the already mentioned tribe, which communicates using just thirty words, we get to know an indigenous community that has a multitude of words for each thing, each of those reflecting its specific condition: i. e. they will use different words for an eagle, depending upon whether the eagle is in the sunlight, or in the moonlight, or under the rain, etc. There is also a tribe which uses the same word to denote completely different objects: they have, for example, one word for “fish”, “triangle”, and “moon”. When there is no food and a child is hungry it is enough for the mother to point at the moon/fish and the little one will be sated.

The discoveries of the Portuguese travellers are not limited to the seas, as becomes known from  Borralho’s account of his journey to the Moon under Mem Taborda’s captainship. Needless to say, the latter has also been lifted from Mendes Pinto’s travelogue. Just like in the story about the talking monkeys, the tranquil life of the indigenous community on the Moon is overturned by the ideas the Portuguese explorers bring along. Mem Taborda and his crew, carried in a makeshift sailing vessel to the Moon from the Tibetan mountains by favourable winds, shake the seemingly solid foundations of the communist utopia built by the Lunar inhabitants. The newly arrived discover to their surprise that the locals don’t have fire arms, work only three hours a day, do not have any private property, and think little of gold because of its sheer abundance on the Moon. At first, they  deride the insatiable greed driving the adventurous subjects of the expanding Portuguese Empire. But as the intruders depart with a load of gold, they have already infected the Lunar civilisation with their avarice, and when they come back in two years’ time, they can contemplate  all the fruits of a society obsessed with accumulating wealth: social inequality, lack of resources, rebellions and repressions.

The stories are not limited solely to the quests for new lands and the enrichment of the empire. We also learn about more personal quests presented as gripping allegories: one man’s quest for God and another’s for a woman.  The former is narrated by yet another seafarer from The Travels, Vicente Morosa. It is the story of a Chinese man called Xang Tu, who sets off on a journey looking for God after his wife’s death. He closely follows the tracks left by somebody he believes to be God, uttering each time when he stumbles upon some evidence of misery or destruction: “God has passed here.” In the long run, the man realises that it is actually the Devil he might be pursuing, ultimately failing to see the difference between the two. As for the quest for a woman, this story is not to be found in Borralho’s manuscript, perhaps due to its excessively racy content. Luckily for Arnaldo Cunha, this tale appears in Barbosa’s text, and he is more than happy to summarise it for us. The protagonist of this tale has sex with a masked woman at a Venitian-style ball, and the pleasure granted to him by her vagina is so great, that he dubs it “the harmonious forest” and dedicates all his life to finding its mysterious possessor. His glass slipper is the memory of his ecstasy, so he travels the world making various women “try it on” by the only method available to him, that is, by sleeping with them. “Proustian precursor of Henry Miller?” wonders the author of the notebook after finishing his summary of this tale. But what about his own quest, does he succeed in proving that he has discovered an unknown monument of 16th century travel writing?

There’s the rub, for lacking conclusive proof of the manuscript’s authenticity at his disposal, Cunha is faced with several different possibilities, and not all of them are favourable for his grand project. The least harmful one is that Borralho never existed – Gaspar Barbosa invented him and wrote both The Harmonious Forest and the fake biography to avoid possible persecution at the hands of the Holy Office. But things could be worse. What if both Barbosa and Borralho are the witty inventions of the 18th century anonymous author of the marginalia? Then most of the revolutionary insights of the Renaissance scholar are nothing but anachronistic flourishes of a person observing the 16th century from the heights of the Enlightenment. And, of course, Cuhna’s discovery will be completely nullified if it turns out that all the three texts have been forged in the 20th century. This issue never gets resolved, but come to think of it, nor does the protagonist’s anxiety about the meaninglessness of life. As he himself neatly sums up at the end of the novel: “All that bitterness. To know that life has no sense and still keep looking for it.” Let’s leave him there. We know that he is just a function, an “existentialist” seedling in the metafictional forest of Augusto Abelaira.

“The key to the treasure is the treasure”, John Barth famously wrote in 1973. Perhaps Arnaldo Cuhna would have a hard time accepting this postmodern principle, but, at the end of the day, this is what really drives his own story. What he might believe to be a failed attempt at a search for meaning through scholarly work and self-analysis, we should regard as a masterfully constructed narrative device not only generating a plethora of meanings for each reader, but also giving  us the pleasure of watching a great ludic mind at work.