Posted on December 19, 2015 by The Untranslated 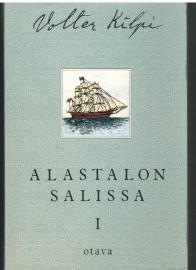 If you are the kind of person who would find fascinating a 70-page account of a character walking across the room to choose a pipe from the mantelpiece, then Volter Kilpi’s novel Alastalon salissa (In Alastalo’s Parlour)  is up your alley. The book was published in 1933 and forever changed the landscape of Finnish literature, as the modernist techniques employed by Kilpi allowed him to demonstrate to a stunning effect the creative potential of the Finnish language. The two volumes of Kilpi’s novel amounting to 900 pages of dense experimental writing narrate just six hours from the life of well-off dwellers of an island parish who have gathered in Alastalo’s parlour of the title to negotiate the building of a barque. The paucity of action is overcompensated by detailed overlong descriptions, the disjointed interior monologues of the characters, the use of dialect and linguistic innovations. The novel has been deservedly compared to Ulysses and In Search of Lost Time, although, as Kilpi’s knowledge of English was not sufficient to read Joyce’s masterpiece, it is more appropriate to talk about the artistic affinities between the two authors than about one’s direct influence on the other.

Although most of the novel consists of the verbalised thought processes of the participants of the meeting and the meticulous descriptions of the setting, there are also more conventional narratives appearing in the text as set pieces. One such story is about Ville from Vaasa, an accountant who runs into debt to fulfill his dream of building his own ship and sending it to Brazil to bring back a load of coffee beans. This story has been translated into German as Die Albatros

Despite the obvious challenges of translating this modernist classic, the complete translation of Alastalon salissa into Swedish saw light in 1997. The gargantuan task was undertaken by Thomas Warburton who had previously translated Joyce’s Ulysses, and, as of now, it is the only complete translation of Volter Kilpi’s novel into any language. As for the prospects of seeing an English translation, there is little to be optimistic about. Only a short passage from the novel has been Englished and made available in the now extinct journal Books from Finland. The first sentence of the translator’s letter to the editors says it all: “Reluctantly (I really have tried) I have been driven to conclude that Alastalon salissa is untranslatable, except perhaps by a fanatical Volter Kilpi enthusiast who is prepared to devote a lifetime to it.” (You can read the rest of it as well as the translated excerpt here.) Of course, it is an assessment of just one translator, and who knows, maybe there will appear a daredevil who will be self-confident enough to shoulder this daunting task.

In case I have sparked your interest and you would like to learn more about Volter Kilpi and his monumental novel, without further ado, I’m redirecting you to Kai Latinen’s informative article (also from the defunct Books from Finland) with the dispiriting title On Not Translating Volter Kilpi.

Update: It looks like the “fanatical Volter Kilpi enthusiast” whose advent has been predicted above has finally arrived. The person in question is Douglas Robinson. Here you can read his translation of the first chapter of Alastalon salissa.

This entry was posted in Fiction, The Great Untranslated and tagged Alastalon Salissa, Finnish, In Alastalo's Parlour, Volter Kilpi. Bookmark the permalink.